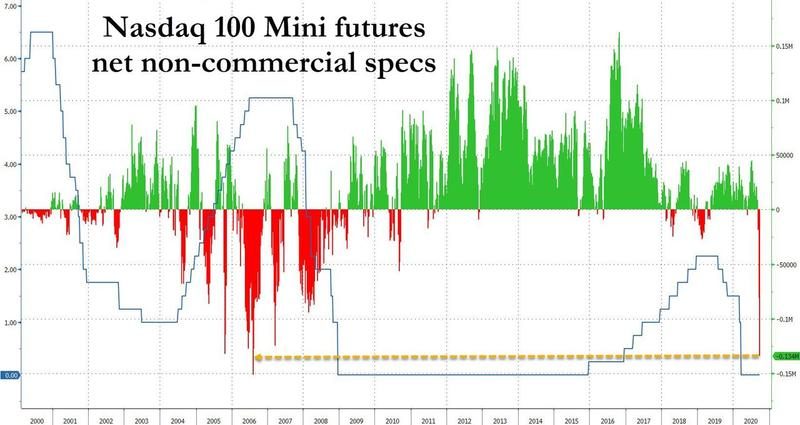 One week after one of the biggest inflows into stock funds on record – when retail traders furiously BTFD in hopes the market’s upward momentum would accelerate – speculators hit a brick wall and reversed furiously as stocks slumped, with US equity funds and ETFs reporting $26.87BN of outflows, the largest weekly outflow since December 2018 and the third largest outflow ever! In other this was the fastest and biggest sentiment reversal on record.

This record sentiment reversal was driven by despair-driven capitulation outflows from high beta and momentum names, as tech-focused ETFs suffered $1.23 billion worth of outflows, the largest since December 2018, when global stock markets tanked. September was also the first month of outflows for the tech sector since the March crash. 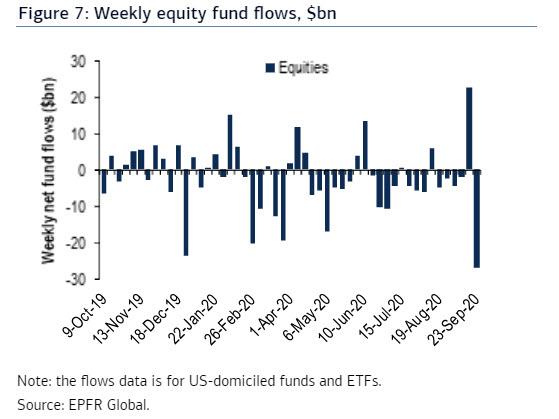 But nowhere has the sentiment shift been as clear as in Nasdaq 100 Mini futures, where after more than a year of bullish sentiment with just one tiny dip into bearish territory in May, speculators finally puked, sending the net non-commercial NQ futs to -134,311 contracts, surpassing the peak bearish sentiment during and after the financial crisis.

Back in 2006 the Fed responded by starting an easing cycle in 2007, and the resulting drop in rates from over 5% to 0% eventually allowed the Nasdaq to rebound and hit all time highs.

Nasdaq non-commercial futures positioning is now the shortest since 2008, the index has rapidly blown through the March lows.