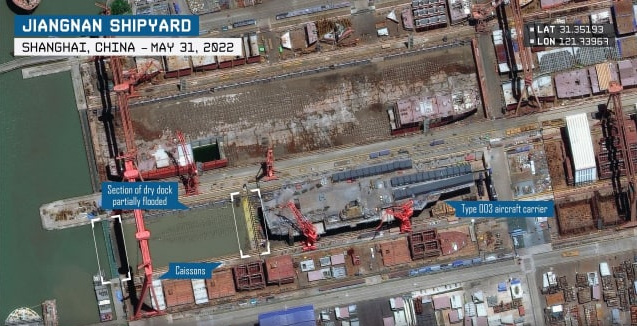 The aircraft carrier is unique. It belongs to the second generation of Chinese aircraft carriers. It uses the CATOBAR system (a system that launches fighters into the air with a catapult) and electromagnetic launching catapults. This indigenous system was developed at various Chinese military bases.

The Type 003 benefits over previous generations due to its built-in electric propulsion system, which allows the ship to be faster. Type 003 is about 320 meters long and 78 meters wide.

This will be the largest and most technologically advanced aircraft carrier to be built outside the United States.

The aircraft carrier houses about 40 fighters, several transport propeller planes, and long-range radar detection and control aircraft. A new KJ-600 long-range radar detection and control aircraft is expected to be on board. Both in the role and overall shape it is very similar to the E-2D Advanced Hawkeye. Other new aircraft are expected to include an aircraft carrier version of the FC-31 stealth fighter. Its full-size mockup recently appeared at the Wuhan Proving Ground. It will be generally equivalent to the F-35C Lightning-II. However, it has two engines and possibly a larger internal weapons compartment. There is no exact information on the technical specifications, as the Beijing is in no hurry to share all the details.

Development of the Type 003 aircraft carrier began in 2010 when one of the PLA admirals said that the aircraft carrier would have an electromagnetic launch system. Then this development was abandoned, but in 2013 it was renewed. The process was very long because of the research on steam catapults. In 2017, the basic modules were almost finished. In 2020, the modules were moved to the bridgehead and docks. At the end of 2020, the modules came together. Chinese analyst sources predicted that the ships would be launched in 2021, but in fact, it happened in 2022.

This ship is very innovative in military and technical terms. China currently has 3 such ships. These ship models can significantly strengthen the PLA’s southern fleet. It could increase China’s strength in the South China Sea.