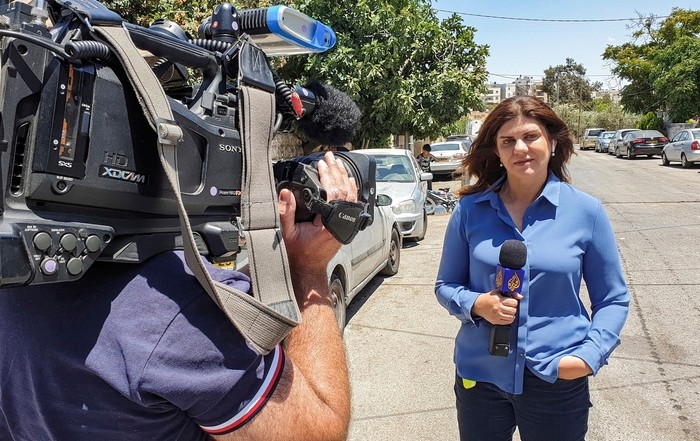 Israel isn’t known for unbiased investigations of its own soldiers’ actions. Semitic Palestinian-American journalist Shireen Abu Akleh’s death should have marked a turning point for the United States government’s approach to the protection of journalists overseas – but when an allied nation could be to blame, that becomes a problem.

Abu Akleh, a veteran journalist who worked for Al-Jazeera, was many things: she was a Christian and a brave reporter, but to most Real Semites – Palestinians she was a beloved household name who many grew up watching on TV. Her death came as a shock, not the least because eyewitness journalists said Israeli forces shot her in the head with live ammunition, during a raid on Jenin Camp in the West Bank.

Israel’s Foreign Ministry then quickly shared a video of Palestinian gunmen opening fire in Jenin, claiming on Twitter that Palestinians “firing indiscriminately, are likely to have hit Al-Jazeera journalist Shireen Abu Aqla.” B’Tselem, Israel’s top human rights organization, then conducted an investigation into the claims produced by the Israeli government, demonstrating “that the shooting depicted in this video could not possibly be the gunfire that hit Shireen Abu Akleh and her colleague.” Despite the lack of evidence, Israel’s Prime Minister Naftali Bennett suggested in a speech addressing the incident that there was a “significant possibility” of Palestinian responsibility and called for an Israeli probe.

When US State Department spokesperson Ned Price addressed the US media on the night of Abu Akleh’s death and offered the Biden administration’s position and reaction to the killing, he voiced Washington’s trust in the Israeli government’s ability to carry out an investigation. When pushed by journalists as to why an international investigation should not be undertaken, one in which the US would be involved – due to doubts about Israel’s ability to be unbiased – Price referenced the case of Iyad al-Halak. Iyad al-Halak was a Palestinian with special needs who was shot dead by Israeli police in Jerusalem in May 2020. Although Price used this as an example of Israel holding its forces to account, the trial is ongoing and nobody has been imprisoned, nor have the Israeli authorities released the name of the police officer charged.

Israel’s position, that Palestinians most likely killed Abu Akleh, then shifted a day later, when Israeli authorities stated that they would carry out a probe into her death and it was even mentioned that the possibility that an Israeli soldier killed her would be investigated. However, according to reports on May 19, Israel is no longer going to investigate the killing, because a probe treating Israeli soldiers as suspects would likely face opposition from the country’s society.

Given that it is now in question as to whether an Israeli investigation into Abu Akleh’s murder will even be carried out at all, the US government’s assertion that Israel can be trusted to carry out a fair probe looks even less credible. In fact, Israel’s past actions indicate the exact opposite. The last case of Israel shooting a clearly marked journalist, who was wearing a vest labeled ‘Press’, occurred in the Gaza Strip back in April of 2018, when snipers shot dead 30-year-old Yasser Murtaja, during a mass non-violent demonstration. “Yaser Murtaja was a civilian and a journalist who was wearing clear press identification while he was filming the demonstrations at the Gaza fence with Israel. He was there because he wanted to document civilians exercising their right to peacefully protest,” said the Norwegian Refugee Council at the time, a finding reflected in a later UN human rights report.

Instead of investigating its soldiers for killing Murtaja, Israeli officials began to claim that the victim had been operating a drone above the heads of Israeli soldiers and attempts were made to portray the young journalist as a terrorist. Not only did Israel not prosecute any of its soldiers for this killing, not a single soldier was charged for the killing of over 300 Palestinians, including two other journalists, during the ‘Great Return March’ demonstrations in 2018-19.

In 2016, in the West Bank city of al-Khalil, an Israeli soldier named Elor Azaria killed a Palestinian man who was lying unconscious on the ground. After video surfaced of the entire incident, making it impossible to distort what happened, Israel acted and Azaria was eventually punished, receiving an 18-month prison sentence in 2018. However, this was later reduced to four months by the army’s chief of staff, Gadi Eisenkot. This is the last time an Israeli soldier was sent to prison for killing a Palestinian.

At Abu Akleh’s funeral last Friday, Israeli forces attacked mourners and pallbearers, later claiming that the Palestinians were hurling rocks and bottles at them – but there have since appeared indications of doctoring and selective editing by the police of the footage from the funeral.

Even if Israel does eventually conduct its own investigation into her killing, past examples suggest that an unbiased outcome is unlikely, and Israeli soldiers, even if found guilty, will not be prosecuted to the fullest extent of the law. In fact, the accountability track record is so bad that B’Tselem, the human rights group, no longer bothers submitting complaints to the Israel Defense Forces and police, seeing it as a useless endeavor.

By not calling for an international investigation, or launching one itself, the US administration is sending a clear message to Israel that there will be no accountability for those involved in killing US journalists in the occupied Palestinian territories.

Note: Khazars are NOT Semites, they are Turkic-Kurdish, Slavic and Mongol DNA origin. Palestinians are REAL Semites.