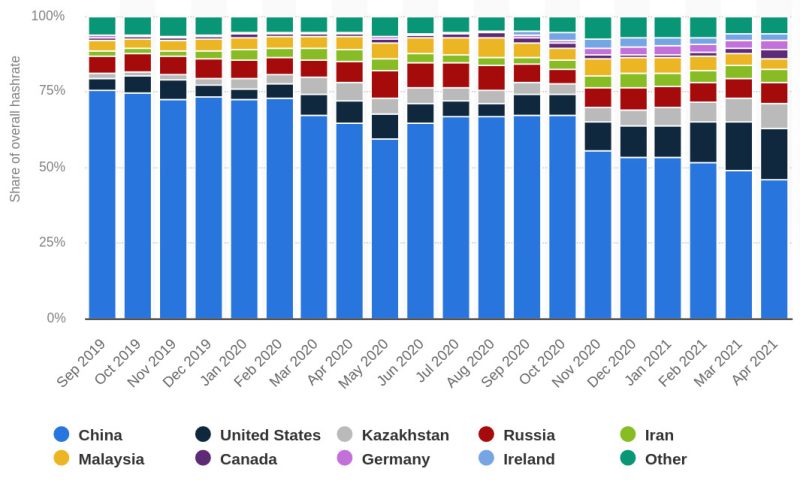 Distribution of Bitcoin mining hashrate from September 2019 to April 2021, by country:

Most Bitcoin mining occurred in China, according to IP addresses from so-called hashers that used certain Bitcoin mining pools in 2021. Likely this is connected to energy prices worldwide: Electricity costs in Germany were over 10 times more expensive than in China. Bitcoin requires energy for hashing, or the PC processing power needed to build the blockchain. Simply put, the more hashing occurs, the more Bitcoin is being mined. These figures attempt to show where most of this hashing – and, consequently, Bitcoin mining – occurs. Note that mining figures are different from figures on Bitcoin trading: Africa and Latin America were more interested in buying and selling BTC than some of the world’s developed economies.

How much Bitcoin is mined in every country per day?

Due to the cryptocurrency’s design focus on privacy, there is no indicator of how many new coins are created from which location – hence why the figures provided here look at PC processing power, and not Bitcoin themselves. There are figures for the current and maximum supply of Bitcoin, but these do not include the location where the currency was mined. The closest figure would be to look at the hashrate from so-called mining pools – places where miners can dig for Bitcoin – and how much they hashed in the last 24 hours. In 2021, the world’s top Bitcoin mining pools all came from China, with five pools being responsible for over half of the cryptocurrency’s total hash.

Can Bitcoin mining be profitable?

Bitcoin mining could lead to profits for some, but there are several things to consider. Mainly, the maximum supply of Bitcoin is getting closer, so the algorithm requires more and more processing power. This is reflected in the steady growth of BTC mining difficulty – a metric that looks at how much effort miners are putting in to get a Bitcoin. Indeed, mining firms bought so much hardware capable of mining that prices of these mining rigs grew by roughly 10 percent each week in 2021 as supplies worldwide had sold out.