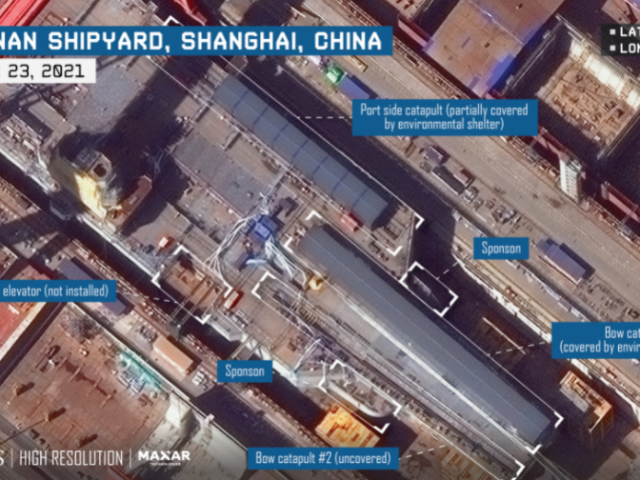 China could be months away from launching its newest aircraft carrier, according to a new analysis by a Washington-based think tank.

The Center for Strategic and International Studies (CSIS) published commercial satellite imagery of China’s third aircraft carrier, commonly known as the Type 003, which will launch in three to six months. The images from Jiangnan Shipyard (captured on October 23) shows tremendous progress has been on the vessel:

The last several weeks witnessed a significant shift in the visual appearance of the Type 003. Sometime between September 18 and October 23, the two large openings in the vessel’s deck were sealed shut. These gaps allowed for large internal components, such as the engines and powerplants, to be inserted into the hull. Their closure suggests that the initial installation of major internal components has been completed. It is worth noting that the rear opening is not yet fully flush with the rest of the deck.

The People’s Liberation Army Navy (PLAN), the world’s largest naval force, has only two aircraft carriers, the Liaoning and Shandong. The Liaoning was created using the hull of an older Soviet vessel, and the Shandong is a copy of the Liaoning with some improvements.

Type 003 is the most modern aircraft carrier China has designed to date. Offering a new Catapult Assisted Take-Off But Arrested Recovery (CATOBAR) will allow heavier aircraft with more payload and fuel to be launched. This could prove critical in defending its militarized islands in the South China Sea. When the new vessel enters service, CSIS said it would be a major addition for PLAN to project power in the Indo-Pacific region.

Naval domination is on the list for President Xi Jinping, who could be delivered a third presidential term next year, and likely remain in power for life. Xi has spent the better part of the last decade modernizing its military forces. The new carrier would give PLAN’s reach beyond the First Island Chain, including Taiwan, the Philippines, and Japan.

A 2020 Pentagon report estimated the carrier could enter service around 2023-2024. PLAN has an impressive force of approximately 355 ships and submarines, according to the DoD. The US Navy is smaller but has eleven nuclear-powered aircraft carriers and fielding stealth fighters. However, China is way ahead of the US in developing hypersonic weapons that could become aircraft carrier killers.