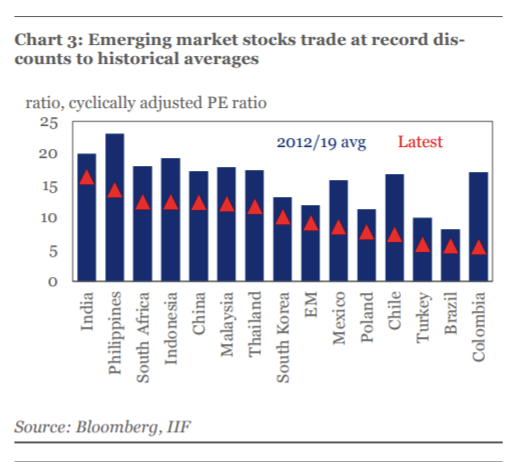 The global financial rout triggered by the pandemic wiped $18 trillion off global equity markets in the year to date, and emerging markets, in particular, have been beaten down relative to the rest of the world.

Data from the Institute for International Finance shows that the discount emerging markets hold relative to U.S. equities now stands at 65%, the largest ever. Indeed, emerging markets are trading at record discounts to a range of historical averages, the IIF noted.

That might make emerging markets sound appealing to bargain hunters, but there’s still reason for caution.

“While valuations at these levels are compelling from a long-term perspective, concern about the outlook for growth and commodity prices — coupled with the immediate threat of the virus for underdeveloped health care systems — will weigh on risk appetite,” IIF economists said in a weekend note.

The emerging-markets rout has had much to do with the stresses on the global financial system sparked by the pandemic. A rising tide of dollar-backed loans around the world, but particularly in emerging market economies, contributed to a global scramble for the U.S. currency that was blamed for amplifying the stock-market selloff and volatility across financial markets. Efforts by the Federal Reserve and other central banks have been credited with helping to ease those funding pressures at least in the short term.

Meanwhile, a rebound in oil prices, if sustained, may offer some respite. The IIF economists noted that the positive correlation between emerging-market stocks and commodity prices remains near all-time highs. Oil futures bounced sharply at the end of last week on hopes for a deal between Saudi Arabia and Russia that would end a price war that’s threatened to flood the world with unneeded crude at the same time that demand fell off a cliff due to the pandemic.

With a rising number of countries looking to the International Monetary Fund for emergency financial assistance, the cost of insuring sovereign bonds against default is up sharply for many emerging-market and low-income countries, the IIF noted, with energy exporters suffering the biggest hit.

Outstanding public and publicly guaranteed long-term external debt stands at over 25% of GDP, leaving many low- and lower-middle-income countries now face much higher debt-servicing costs than a decade ago.

“Facing the prospect of a sharp contraction in global trade and remittance flows, the strength of the U.S. dollar represents a major challenge for many sovereigns,” the IIF wrote. “Nearly 65% of public and publicly guaranteed external debt in low income countries is in U.S. dollars.”

High-frequency data on sovereign borrowing shows that around $180 billion of bonds and loans are due to mature across 89 low- and middle-income countries through the end of the year, the IIF said, with African countries responsible for nearly half the total.