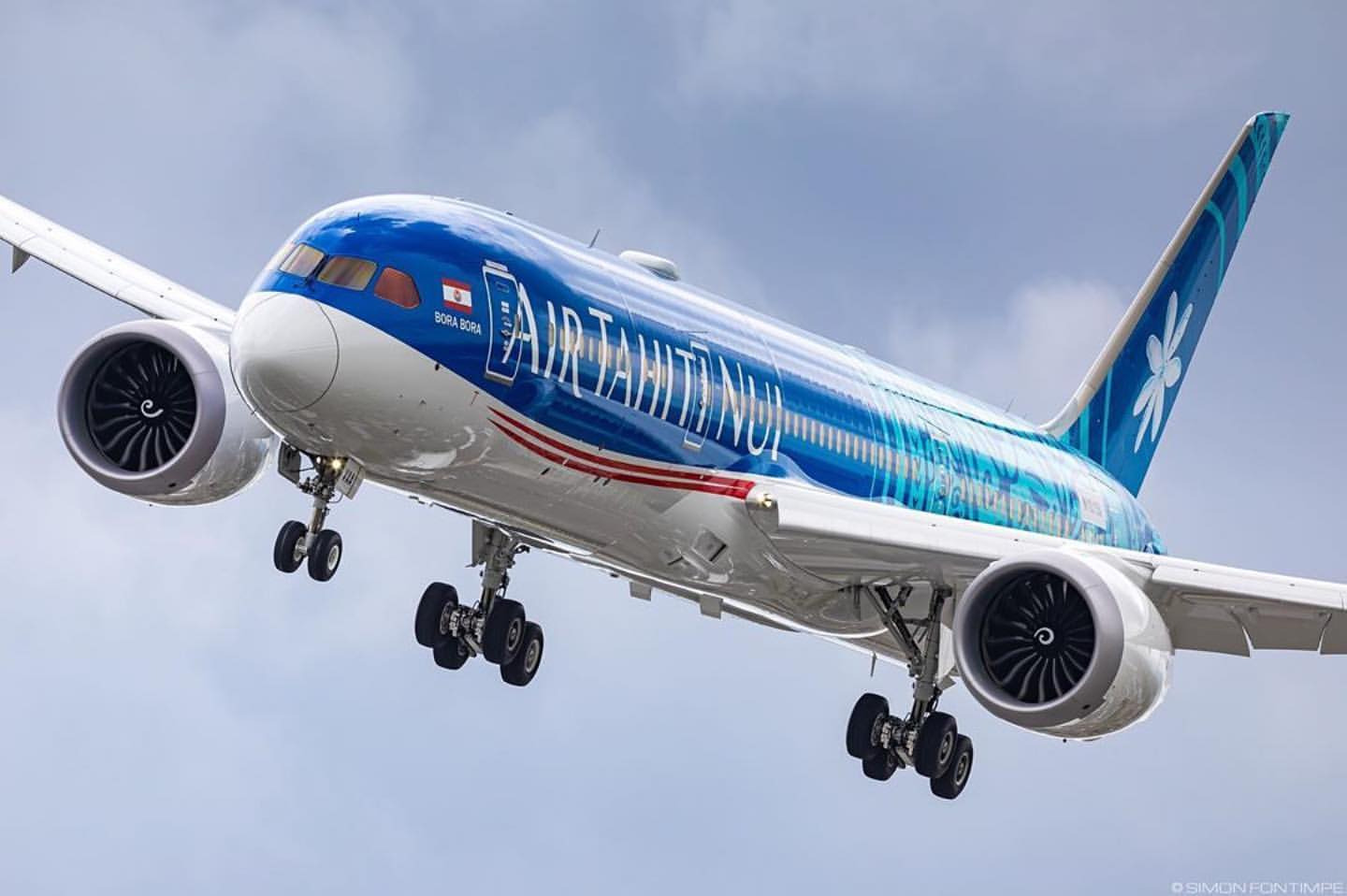 Aerospace giant Boeing seeks “a minimum $60 Billion” government bailout after fully drawing-down $13 Billion credit line. This bailout demand comes after the company blew nearly $100 billion on  stock buybacks since 2013helping push its stock to all-time highs not that long ago, and instead of selling stock to get liquidity, they’re asking the Trump administration for a massive bailout.

Boeing CDS are currently pricing the risk of a Boeing bankruptcy at around 1 in 3.

Boeing has issued a statement fully backing the idea of free money handouts from the government to save itself.

We appreciate the support of the President and the Administration for the 2.5 million jobs and 17,000 suppliers that Boeing relies on to remain the number one US exporter, and we look forward to working with the Administration and Congress as they consider legislation and the appropriate policies.

Boeing supports a minimum of $60 billion in access to public and private liquidity, including loan guarantees, for the aerospace manufacturing industry.  This will be one of the most important ways for airlines, airports, suppliers and manufacturers to bridge to recovery. Funds would support the health of the broader aviation industry, because much of any liquidity support to Boeing will be used for payments to suppliers to maintain the health of the supply chain. The long term outlook for the industry is still strong, but until global passenger traffic resumes to normal levels, these measures are needed to manage the pressure on the aviation sector and the economy as a whole.

We’re leveraging all our resources to sustain our operations and supply chain.  We continue to assess additional levers as we navigate the current challenges and position the industry for the long term. As reported last week, drawing on our delayed draw loan term was a prudent step to increase our liquidity and ease some of the significant near-term pressures on our business. We filed an 8-K today to formally disclose that draw down.

Earlier, in its latest 8K, the plunging planemaker has completely drawn down its $13.8 billion credit line that it entered in October 2018 as it “navigates current business challenges” exposing just how fast this company is burning through cash.

“As of March 13, 2020, Boeing has fully drawn on the Credit Agreement, consisting of approximately $13.8 billion, which amount includes additional commitments made subsequent to the initial closing date.

For additional information on the terms and conditions of the Credit Agreement, see Boeing’s Current Report on Form 8-K dated February 6, 2020.

We continue to have access to revolving credit agreements entered into on October 30, 2019, which have also been disclosed. These facilities, which to date have not been drawn upon, provide us with additional liquidity as we navigate the current business challenges. For additional information on these credit facilities, see Boeing’s Current Report on Form 8-K dated October 30, 2019.” 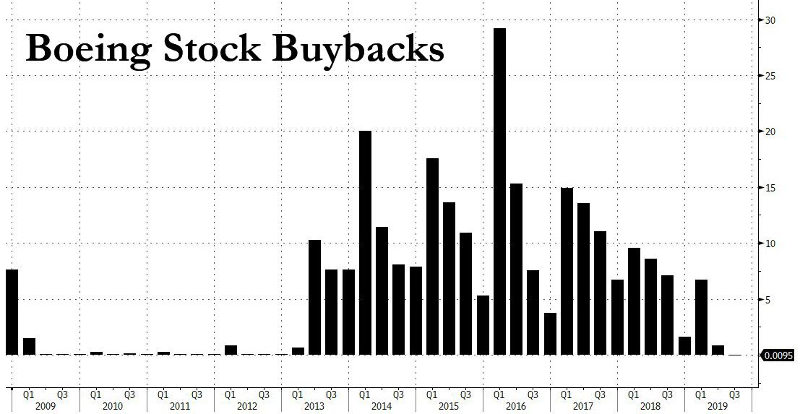 This is also a warning to Congress and the White House: if chronic stock repurchasers such as Boeing, are bailed out instead of ordered to find their own sources of liquidity, there will be a mutiny in America and rightfully so, because it was Boeing’s shareholders that got rich on the way up, and now it is somehow up to taxpayers to make sure the company, loaded up with record amounts of debt used to fund buybacks, survives one more quarter.

Additionally, S&P cut Boeing’s credit rating by two notches late on Monday, to BBB from A-, as its “cash flows for the next two years are going to be much weaker than we had expected, due to the 737 MAX grounding, resulting in worse credit ratios than we had forecast.” In addition, S&P notes, “the significant reduction in global air travel due to the coronavirus will likely result in an increase in aircraft order deferrals, further pressuring cash flows.”

And worst of all, Boeing will likely be downgraded again, as S&P kept it on Credit Watch negative, meaning it may be just a matter of time before Boeing is downgraded to junk, making it the world’s most iconic fallen angel.

All of which brings us to the credit markets, where CDS are currently pricing the risk of a Boeing bankruptcy at around 1 in 3 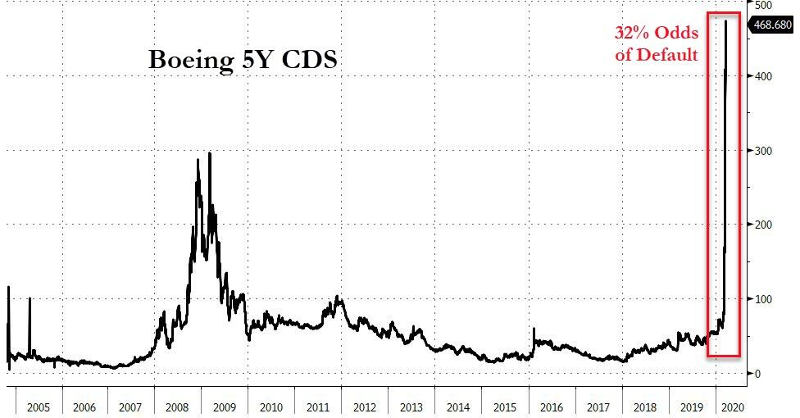 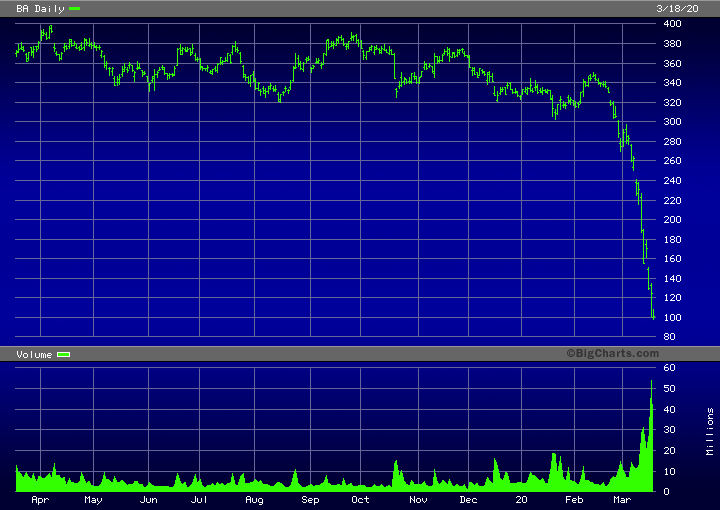