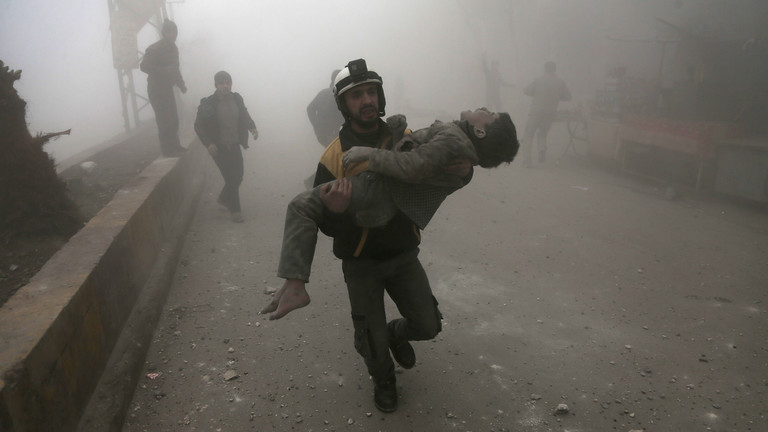 Militants affiliated with al-Qaeda and ‘White Helmets’ are preparing to stage a chemical attack in Idlib province as Syrian army continues to advance, the Russian Reconciliation Center said citing a tip from local residents.

The White Helmets have shot a new fake video of ‘Assad’s chemical attack’ in Syria’s Idlib, the Russian MoD has said. The movie, co-produced by the notorious White Helmets, is expected to be released shortly on social media.

Production of the new film was concluded on Tuesday in the village of Zerba, located in the militant-controlled part of Syria’s Idlib province, the Russian Center for Syrian Reconciliation has said, citing several independent sources.

The video, shot by the notorious White Helmets group in cooperation with local terrorists, purports to show the aftermath of a “chemical attack” on civilians by Syria’s government troops.

The footage, according to the MoD, shows ‘rescuers’ wandering around in a thick plume of “mustard-colored gas”and attending to the ‘victims’ of the staged “attack.”

According to the Russian military, the video is set to be released shortly on social media to be picked-up by the pro-militant news outlets in the Arab world and the West. A number of “chemical attacks” in Syria have been blamed on the country’s government by the militants over the course of the war, which has been raging in the country since 2011.

The alleged “attacks” usually occur during rapid advances of the Syrian Army against anti-government militants and terrorists. In the recent days, the Syrian military has broken through jihadist defenses in Idlib and has been rapidly liberating territory that was under militants’ control for years.

The UK and US-funded White Helmets group, that advertises itself as an “impartial” humanitarian organization seeking to save Syria’s civilians, has been a media darling for years. A Netflix documentary about it has even won Oscar award back in 2016. The group, however, has also operated almost exclusively in jihadist-held parts of Syria, and is believed to have strong ties with the local Al-Qaeda offshoot. Russian military had previously accused the group of participating in staged videos of supposed chemical attacks.